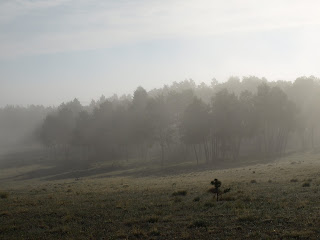 It doesn't seem possible, but our trip to Colorado that we were looking so forward to has come and gone.  But in its wake are some memories that will forever be embedded in our hearts.

The trip was everything we'd hoped it would be and more.  I had never been to the mountains of Colorado before, and the majesty of it all was more than I had been prepared for.  From the amazing pass between Colorado Springs, up the mounain, to Woodland Park, to the gorgeous town itself.  Everywhere you looked there was something to see.  Deer walking around the neighborhoods, aspens trees scattered everywhere, their leaves singing in the breeze.  And each turn you made brought your eyes to the wonder of Pike's Peak, that watches over everyone like a protective parent.

If there was any doubt that Woodland Park was the place we would end up in our future, they have been wholly eradicated.  I have never before felt more connected to a place, or at peace, as when I was standing in the forests of the mountain. 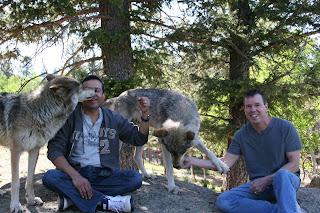 While we were there, we celebrated our 20th anniversary of being together and our 4th anniversary of marriage.  On that day we did something that will forever change our lives: We had a very intimate interaction with wolves.

Since writing Johnny & Joey adventures and creating the character of the grey wolf Ilza, who watches over Lazoo, the grizzly, I've had a certain connection with wolves.  Perhaps I always have, even back as far as when I wrote Blue Moon and the wolf connections there.  They are amazing animals.
So, when Steve and I went into Divide, Co, about 10 miles west of Woodland Park, we couldn't pass up the opportunity to make out with wolves at the Colorado Wolf and Wildlife Center.

We say "make out" because that's pretty much what we did.
Before going into the enclosure with two grey wolves, we were given instructions (quite a bit of instructions, that went along with removing chapstick from our pockets and anything else the wolves might take an "interest" in).  We were told that wolves will lick each other's teeth to show that they have accepted you.  If we didn't want our teeth licked, we would simply keep our mouths closed and back our head away (don't push them away because that would be seen as an insult and things might get ugly).  But Steve and I had no aversion to the teeth licking, we looked forward to being accepted by the wolves.

So, while we interacted with Micha and Keara, we did indeed get our teeth licked, along with the rest of our faces.
It was a surreal experience to have such powerful animals literally licking our faces, knowing that at any moment, they could rip them off they had a mind to.
I keep referring to the moment to sky-diving.  I'm sure the thrill of that is the actual jumping out of a plane and the sensation of falling to the earth, knowing that there is always that slight chance something may go wrong.
The intimate interactions with those amazing animals was our way of jumping out of a plane thousands of feet above the Earth.
It is something we will never forget, and something that changed us in a deep metaphysical way.  It was the perfect way to end our trip to Colorado.

So, now we're back in Austin.  I feel weird saying "Back home" because I feel my home is in Woodland Park.  They say home is where the heart is, and yes that's true, but I left part of my heart on that mountain as a reminder that we will be back-and we'll back to stay. ﻿