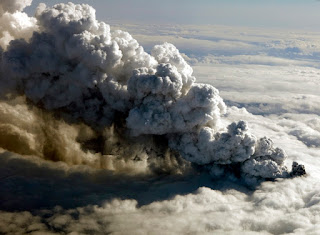 The volcano that's erupting in Iceland is messing up a lot of people's air travel and causing headaches for everyone. But if you take away all the trouble it's causing, and just take it for what it is: an amazing natural phenomenon, it's incredible. This is something that the Earth is doing and has been doing all over the work since the beginning of time. The planet knows what it's doing. There's a reason it's doing it. And on top of it all, it's actually really pretty. Sure it may spew toxins into the atmosphere, but again, it's doing it for a reason. They say that this may lower the Earth's temperature for a while because of the ash cloud. Perhaps that's why it's doing it. I'm not saying that the Earth has a brain and consciously knows when to do things, but nature does pretty well on its own without us.
So, as long as you're not one of those poor suckers trying to travel, just sit back and enjoy the show.
Be nice to each other.
Later-