Off to the co-op 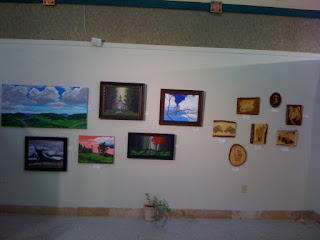 Last week Steve and I had our art shown at the Austin Artist Co-Op. We didn't have any sales, but the exposure was good. Our stuff has been hanging all week and last night I received a call from a guy who wants me to do a burning of his dog. He said it's some kind of a spaniel. I told him I would have to see the dog first, so I'm meeting him there today around 11.
It's weird to think that strangers are asking me to do burnings for them. I really don't like doing commissioned work because it adds a level of stress to the work that I usually find fun. It adds stress because I can't just screw a piece up and throw it away if that happens. I actually have to finish a piece because it's paid for. But, I guess I'll have to get used to it if I want to try and do this when we move to Santa Fe.
Anyway, not much else has been going on with me. I'm finally feeling better. Now Steve has been sick for the past few days. It's allergies with him, too, but the way it hits everyone in Austin makes us crazy. Everyone gets the sore throat and coughing and runny nose or congestion. I can't wait to move!
I drove by our old house yesterday and was shocked to find that they removed all my stepping stones and they redid the front garden. While the stones looked better being there, the garden looks nice. Except they put a bald cypress in the front and that tree is too big (or at least going to be too big) for that spot. But it's their house now and they can do whatever the fuck they want.
Okay, that's it for now.
Be nice to each other.
Later-