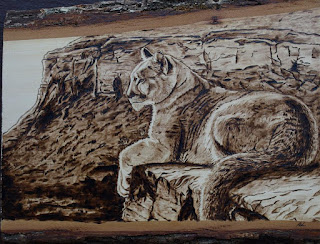 It's Friday and I'm feeling much better. Of course I'm feeling much better, there's only two more days before I have to go back to work. But that's fine, as long as I'm feeling better, that's what matters.
Steve and I went down to what's called First Thursday, here in Austin. It's kind of a street fair of sorts held on the first Thursday of each month. We wanted to go sell our artwork there, but it just wasn't what we thought it would be. It was kinda cheesy and kinda more like a flea market than anything.
But tomorrow there's another art show being held what a bunch of artists can bring their stuff and sell it. Hopefully that will be better so we can start selling our work and making some money off this shit!
Anyway, other than that, we don't have much planned. Steve has to work tonight and tomorrow night, so I won't be doing much. My burner had to be sent back to Canada because it went out, so I won't have that back for another three weeks. I want to start a new project and it's killing me that I can't.
I'm headed to the gym here in a little while after I shower and then I come home to sit and read. Maybe I'll go by the pool or something.
Be nice to each other.
Later-