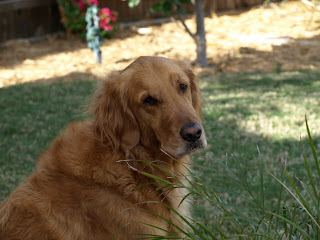 I woke up yesterday feeling like shit. I went to the gym and sat in the sauna for 45 minutes (on and off) and today I feel a bit better. I still have a little cough, but I'm better enough to say that I need to get out of the house.
Steve and I are gonna take Buster to the Greenbelt to go swimming. It's either that or we have to give Buster a bath because yesterday morning, we were eating French toast (Steve and I, not Buster) and I served it to Steve in bed (I know, I'm wonderful) and when we were done, Buster went to jump down and his tail brushed across the plate and his big fluffy plum of a tail got covered in syrup. It's lovely. Just one of those things. We tried to get it out with a wash cloth, but it's just way too much. So, if it's a choice between a bath and swimming, we'll go swimming.
I didn't do much yesterday on account of the way I was feeling, but I did manage to almost finish the book I am reading and that's it. Pretty boring. I really need to get back to practicing the guitar regularly. I've been pretty lax lately.
I read that there was bomb making stuff found in Times Square yesterday evening. That's fucking great. Thank God that He was watching out for us and it didn't turn out to be something devastating. I mean, who the fuck? Aren't we going through enough right now with the oil slick and the flooding and the volcanoes and the earthquakes? Come on, idiot! I feel pretty safe to say this to the person who left that stuff (since I don't think anyone reads this blog, much less a terrorist);
You're a fucking asshole! If you're from another country and came here to do something like this because you don't like us, then get the fuck out and go back to your cave! If you're an American and did this, then you're even worse. You're a traitor! Go stick a bomb up your own ass and do us all a favor!
Okay, that's it. What do you think? Think he'll read it?
Anyway- that's it for now. Be nice to each other! No bombs!!!!!!
Later-