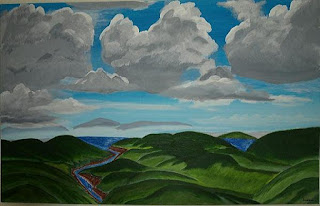 Steve and I are going to be showing our stuff for the first time publicly today at the Austin Artist Co-Op. We're pretty excited about it. We're hoping that there will be a lot of people there, but it is Mother's Day, so who knows. But that could also go in our favor with everyone spending the day with their mothers and taking them around town and shit.
We, of course are mother free. Steve's is in Amarillo and mine is in Heaven, so that frees us up.
You know, that's one thing that's always bothered me. I know it's a natural question: "What are you getting your mother for Mother's Day?" But my mother passed away when I was six, so I haven't had a Mother's Day in almost 29 years. I just have to say "Nothing, she passed away a while ago." Then there's that awkward moment of silence. Perhaps people should ask, or find another way of asking. I don't know of one, but it's just a thought.
Well, to all of those mothers out there, happy Mother's Day.
Be nice to each other.
Later-