The struggles of parenting- 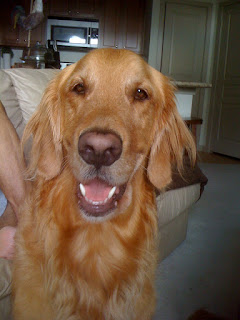 I guess I should count myself lucky.  Buster is now six years old, leaning more toward the seventh year of his life, and we have never had a disastrous situation regarding (how can I say this gently? I can't.) diarrhea.
Well, our lucky streak ended yesterday.  I should say my lucky streak, since Steve of Iron Stomach can never handle such things, and clean up is left to sit heavily on my shoulders.
And last night that weight seemed equal to, if not more than, a two-ton truck.

You see, our baby has, once again, picked up something at the dog park in our complex.  This happened once before, but things were taken care of outside, and after a very expensive trip to the vet, it was resolved within a few days.
We had thought, when we realized that something was not right down under with Buster again, that it would resolve itself in much the same manner.
WRONG!
Night before last "things" seemed to be getting better than they were that afternoon, when Buster would take care of business, begin to walk back home, and stop . . . think about it, and, like a good boy, turn and walk back to the appropriate place of business to finish what he thought was already done.
(Come on, we've all been there.)

Yesterday Steve and I had to both work during the day.  I came home at lunch to take Buster out, he did what had to be done, things looked okay, and I went back to work.
Then I came home that evening.
I almost called 911.  It looked like a crimes scene.  The only thing missing were the mutilated bodies of a chocolate bunny family.
It was everywhere.  I don't know where he was trying to go or what he was trying to achieve when the attack hit him, but he had traveled quite a ways around the living room.  And of course, Buster was in the kitchen, ashamed and fearful of punishment.

Obviously there was not going to be any punishment, and the first order of business was assuring him that, although it was not okay, it was okay.
Then, for the next forty-five minutes I cleaned up (Steve had come home and offered to take Buster to get some stomach medicine.  He left a cloud of dust in his wake.)

So, I stayed home today to watch over Buster and to steam clean the carpet.
Good times.
But, you do whatever needs to be done for the ones you love.
I am left wondering, though: If Steve doesn't get a better handle on his gag reflexes-what home he'll put me in when I reach diaper age?