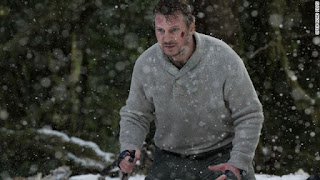 Although Steve and I are both feeling the horrible effects of cedar fever, we decided to hit the movies yesterday. (It sounded like a better plan than the gym.)
The movie of choice-The Grey.  The movie stars Liam Neeson as one of a group of roughneck oil drillers who find themselves struggling for survival after their plane goes down in the wastelands of Alaska's back country.
Let me first start by saying that I am a weird sort of chap, who is terrified of flying, but loves to see movies about plane crashes.  And The Grey does not disappoint on that aspect. In fact the scene only reaffirmed my terror of flight and the knowledge that an air disaster would be a horrible thing to have to go through.
And in the case of Neeson and his co-workers, the plane crash and subsequently surviving it, was the least of their problems.  Not only are they stranded in sub-zero temperatures with no food or supplies, but there's an angry pack of wolves who have decided they have a personal vendetta against the intruders.
The movie is exciting, at times gruesome, and there was more than one or two moments when I found myself with the tears flowing.
So, if you find yourself bored at home with nothing to do, go see a good movie.  Go see The Grey.