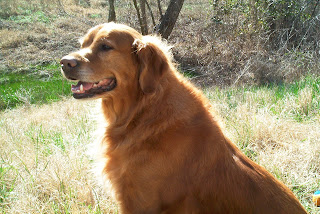 It's strange, this life thing.
In 1996, Steve got me a seven-week-old golden retriever puppy.  I had just finished my first novel and knew right away that I wanted to name my new puppy after the title character-Luthor.
For more than eight years Luthor brought us joy and filled our lives with so much happiness we couldn't believe.
Then things started to change . . .

In 2001, 9/11 happened.  In 2003, the war in Iraq began.  Then, shortly after, our lives changed forever when Luthor was diagnosed with cancer.  He went through Chemotherapy with no bad side effects and thought he would be just fine.  But that was not the case.
Luthor began to do what they called "walk the walls".  He would need to lean against walls in order to walk straight.  We immediately took him to the doctor and they did a CAT scan.  We were called and told that the cancer was not gone, in fact, it had spread to Luthor's brain, and there was nothing they could do.  We never brought Luthor home that day.  We were with him when they put him to sleep, a month before his ninth birthday.

I have never in my life known such anguish.  We were both devestated.  My heart was broken.  I admit that there were times when I wasn't sure I wanted to go on, but I knew I had to because Steve needed me.

So go on I did.  And the years passed.  Then Buster came into our lives and taught us how to love and laugh again.

Now, in 2011, the war in Iraq has finally ended.  Last night the last of the U.S. troops left.  And at this time, our lives are about to change again because of that book I wrote so long ago.  That book that is Luthor's namesake.

Our lives were never the same once Luthor came into it, and they would never be the same once he left.  But he is never far from our thoughts.
I know he is with me as I embark on this new journey.  And I hope he gives me the strength he did as he walked by my side so long ago.