- March 13, 2013
Part of being an Indie author is marketing. For the most part, I don't mind that. I actually like coming up with cool ideas on how to get the word out about my new books. I've had trailers made and flyers, and also took a picture with a giant snake for Serpenteens.

But there are always those times when you feel it's just not enough, and that euphoria kind of fades slightly. But another part of being an Indie author is not letting those times last very long.

I have high hopes for the future of Serpenteens. Once people start meeting Kody, Talen, Kurt, Lana, and Brodee, they'll spread the word on what a cool gang they are.

So, take a chance on the Serpenteens team and read their tale. It's only the beginning. The first installment of a four-book series. Whether it's a tornado, hurricane, flash-flood, or blizzard the team will fight through and use their powers to overcome any obstacle.

And don't forget to LIKE the Serpenteens FB page at Facebook.com/Serpenteensbooks 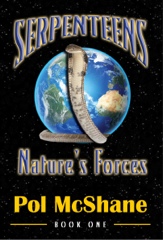