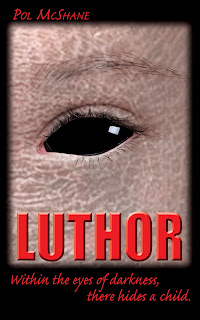 The child was two. Two years of living and learning each day what would be expected of him in the future. Two years of learning that, for some reason, he was different than others. And that difference was not a good thing. He was different than the only other three people he could remember seeing in his two years of life: the doctor, the father, and the mother. They looked different than he did and they didn't like it. It seemed the mother didn't mind the difference as much as the other two.
He could see it in their faces. He could feel it each time they refused to touch him or come near him when he cried. They were afraid, but at the same time cared for him, fed him, and kept him well. If they despised him so much, why did they do this?
He was a child of two. He knew these things were going on around him but didn’t understand why. He could see his skin was not like the others’. He could feel that his skin was rougher than the mother's or the doctor's. He didn’t know about the father. The father never touched. The doctor had to touch him because he made the child well when he was sick. The mother didn’t mind, though.
He’d learned the words they spoke. Some of them made sense, some didn’t. At times it was easy for him to learn, other times it was not. Other times, he forgot things.

Times he cherished not remembering.

* * *
Toys . . . toys belonged to children. Children of all ages owned toys. He had the most toys of any. The mother would give him a new toy every day. Yes, it was the mother who did not seem to care about the difference. She just brought toys and held the child and spoke of angels in the ceiling. She spoke of many things to the child but angels were her favorite.
“My little angel,” she would whisper, softly in an ear.
She would come into the large room that held no real furniture, just a playpen and a large bed with cages on the sides. The child remembered when the cages were put there. He remembered when he fell out of the bed the first time. Then he fell out again. He fell
out a lot. He would toss in his sleep while having nightmares full of terror and dread . . . full of himself. He never had real nightmares about the other three, only about his own feelings when he first saw his reflection in a mirror . . .
Nobody was really trying to hide anything from the boy. Nobody really thought he would understand. But it was the mother who had first noticed he kept touching his face, then hers. His, then hers. It was as if he was blind and was trying to figure out what they both looked like. But she knew he could see. She knew he had been trying to figure it out.
She hadn’t meant to leave anything in his room. She had brought up some food and left the silver tray. She didn't even notice. But she heard the scream. She heard him yell and the tray fall. He could see himself so clearly in the bottom of the serving tray.
She held her angel for a long time until his tears stopped and he finally fell asleep. It was then he realized exactly how different he was. It was that feeling he felt every day since. It was that feeling of loneliness that caused the dreams, the nightmares, to come to
him. It wasn't anything out of the ordinary. The child was really just remembering what he looked like. So the bars were put on to keep him from falling. On the other side of the room was a playpen, a very large playpen that had become useless six months earlier. The child climbed out of it. It had become a game he played with the mother. The child would see how many times he could climb out and how many times she would put him back in. Who would quit first? He got his answer after the thirty-fifth time as he slid his foot down the side of the pen, reaching for the floor . . . but what happened to the mother?
“Okay, you little freak. I'm tired of these goddamn games. You don't want to stay in the pen, then don't. But don't ever expect to go anywhere else, ever!”
It was then the door was first locked. The father came in and yelled. It was then the door was never opened again, aside from coming in and out. Even then, it was only the others who were allowed out, not the child. He couldn't really remember ever going out before then, but he knew if he had, it would never happen again.
In this room, locked and shut away, sat a child surrounded by toys.
Alone.
Alone and afraid because there was nobody there for him. There was nobody there to play with. There was nobody there to listen to, whether he understood all they said or not. There was nobody there to tell him there was nothing to be afraid of when the lights went out and the room went dark. He learned to see in the dark. For to see in the dark was the only way the child could be sure there was not another “him” somewhere in the
room—out there in the blackness.
Available at:
http://www.polmcshane.com/