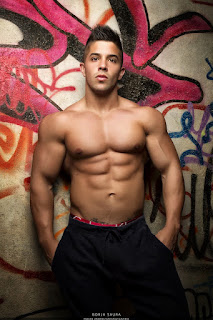 For years I've been trying to bulk up. Back in the day, I had a pretty good body going on (I was also in my 20's). But as the years passed, the workouts suffered, the laziness increased, and my chances for the body I always dreamt about got further and further away.

I've always had weight problems, never able to gain. My metabolism is to blame. I thought it would slow as I got older, but alas, nope. When I don't eat a meal, or am very active during the day, I can easily lose several pounds.

At my lightest, about four years ago, I weighed in at 121 lbs. Yikes, I know. Since then I have worked at staying away from being that light, but the heaviest I managed was 127.

Two months ago, when we moved from our beloved cabin in the woods down to the Springs, I made a vow to make big changes. I joined the gym down here and have been going religiously. I have also been drinking weight gain shakes three times a day.

I am happy to say that things are working! My current weight is 136! It may not seem like a lot to some, but since I usually lose two or three pounds over night simply while sleeping, its a huge accomplishment.

So, give me a couple more months, and the picture at the top of the post won't be some random guy with a  great bod, it'll be me!