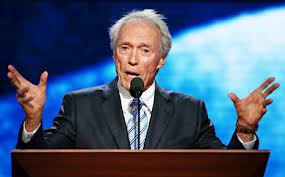 By now I'm sure everyone has seen or heard about the infamous Clint Eastwood talking to a chair speech.  Yes, it was weird, but I get what he was trying to convey.

But on the other hand, this is one of the reasons I don't like politics.  It's because you get to see who people really are.

I always thought Clint Eastwood was a cool guy.  I liked his movies and thought it would be sweet to meet him one day.

But now that I've learned he's a Republican, and I've watched him insult the president, I feel totally opposite.
I know he would never support me in my life, so why should I ever go see another of his films (not that there would be many left in the future, if you know what I mean) and support him?

And Eastwood's not the only one.  There are "friends" on my Facebook page that I thought were cool.  But as of late have seen some posting their support for Romney, and it's making me question everything.
"They're Republicans? They like and support him? Well, then do they really like me?  Since Romney is a religious Republican that doesn't like the gay community, deep down, do they not like me?"

I don't see how they could, since they support someone who's against so many others.  How can they like and trust him and on the same hand like and support the things and people he's against.

It feels like my bubble of accepting people I have around me got a little smaller, and I don't like that.