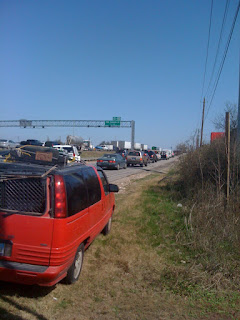 It was a lovely day in Austin for drivers. They closed two of the three lanes on I-35 causing major gridlock all day long. The same will be going on tomorrow. Luckily, I don't have to go anywhere. I worked out at the gym here at home instead of going to the gym two streets over and avoided the whole mess. I'll be so glad when we move to Woodland Park and don't have to worry about traffic and the hassle of all this crap.
As for the rest of the day, and most of the week to come, I have made the decision to go through the first installment of the new series one more time. I'm glad I did because there were things I found that would have been missed. I was going to go in and fix some errors that were missed by the editor (oops) anyway, and that prompted me to just go ahead and do a complete read through. I took off the entire week to do this so I should get it done. It may not sound like a big job, but it's a 138 page manuscript and I've already read it and reread it five times. But I think this time it will be as good as it is going to get from my end and I will feel comfortable enough to send out chapters and the entire manuscript to publishers who ask for it. There are those who simply ask for a query letter and those who ask for more. While I would prefer not to send out the manuscript, it will be good to have publishers read it. That's part of the problem with queries. They don't get past the letter in order to see the work.
We're hoping that things will really start moving once I begin sending out packets.
Fingers crossed!
I would love to tell you more about the series, but ever since my book Blue Moon was supposedly going to be turned into a movie and then five years later was turned into something so different I was pushed aside-my guard is way up.
Anyway, that's it for now.
Be nice to each other.