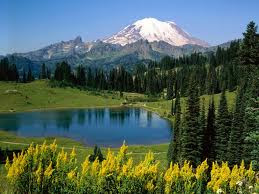 It's Monday. The rest of the city's getting ready for work but I'm on vacation again. I enjoy taking vacations (of course) but it always makes it that much harder to return to work afterwards. I think it enforces my hatred for the place. But I've only got four more years to go before retirement. Four more long years. I've heard from some that those years will fly by, but I have my doubts. I'm the type of person who can't stop looking forward and inevitably can't stop waiting for what's to come. This results in little more than watching water boil.

I'm looking forward to retirement, as would anyone. Steve and I will be moving to Colorado, when the time comes. Woodland Park, if plans stay the same. We've gone around and around on several different locations over the past few years but have settled on Woodland Park. Of course if all the stars align and things fall into place for us as we pray they will, retirement will come much earlier.

If things do happen faster than planned, Steve wants to buy a house here in Austin with a pool and stay for one more year. We've always dreamed of having a house with a pool, and the summer heat here would be better for it than in the mountains of Colorado. I can't say as I blame him. As I said, we've always dreamed of having a pool, one private enough to do as we please, if you get my drift.

Although, the thought of having to stay in Austin longer than we have to is almost more than I can bear. I can't stand it here. The traffic and the summer heat, and the winter heat for that matter. It's the end of January and the past four days or so have been in the mid 70's.

But my main priority with writing is to be successful enough to support Steve and give him whatever he wants. That would make me happier than anything else, honestly. So if staying in Austin for a year longer so he can lay naked poolside all summer is what he wants, I'll do it. Of course I'll be lying right there beside him so it won't be too bad. And if things go as we planned, perhaps I won't have to get out in the traffic-clogged streets as much as I do now and it won't be too bad. We'll see.

That's it for now. Be nice to each other.