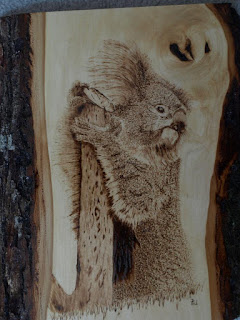 You may think that, since I've been on vacation since the Friday before last, I'd have so much time on my hands that I'd post every day. That's what I would think, too. But as it stands, I've been on a burning frenzy.
Over the course of the last ten days, I've completed two wood burnings, each of which would have normally taken two weeks to finish. One obviously being the koala bear above. It was done mostly by stippling.
My hand hurt after that one.
I finished a grist mill, also. Don't worry, I'll post it tomorrow, for all of you eager readers who will not be able to sleep tonight for the suspense of it all.

Other than that, I've just been enjoying my time off. I've been going to the gym in the morning (they have a great gym at the apartments), get done with that about seven, seven-thirty (yeah, I'm still getting up really early). Then I start burning for a few hours, until I need a break and go to the pool.

Ahhh, I wish life was always like this. No worries, no time schedule, no boss. But alas, it is not. For the most part, it sucks. But I have six more days of vacation left and I'm going to enjoy every minute!