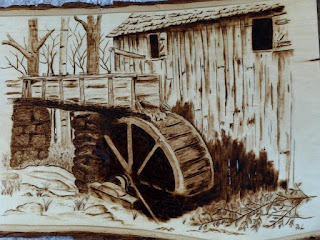 Well, I've been on vacation since Friday. It's been nice, pretty much just like a weekend up until today, but still, just knowing I didn't have to go back to work for two more weeks, made it a great weekend.
The unfortunate part-Steve worked Friday night, Saturday night and Sunday afternoon. Now he's in Amarillo for two days visiting his folks.
I haven't seen my husband a lot during my vacation but I've gotten a lot of burning done.
I started this gristmill on Friday night. I spent three hours on it that night and for the next three days spent about seven hours a day. I only just finished a little while ago.
I was fun doing a building, instead of my usual animal image, I thought I would give it a shot. But I think I'll stick with animals. The next one I'm going to do is a koala bear done completely by stippling (thousands of tiny dots repeated layer upon layer to create a picture).
It will be a real test of my patience.
Okay, I have something cooking for me in the oven, but I will be back tomorrow or something. I'll fill you in on all the exciting moments you've missed.
Later-