Battle of the Gods 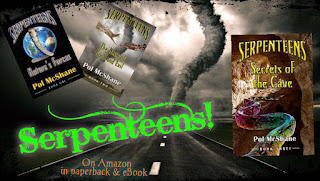 I have finished the 1st draft of the final installment of the Serpenteens saga, Battle of the Gods. It turned out just as good as I had hoped it would, but was also not without its challenges.

It was a bit hard to close the story. After four books, the teens and I have been through a lot. I hope I did them justice.

If you haven't yet met the Serpenteens, there's still plenty of time before Battle of the Gods comes out!