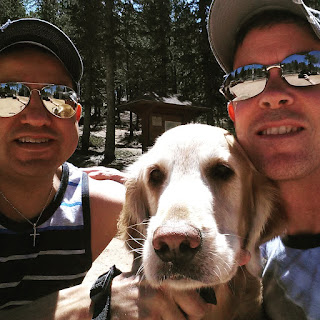 Yesterday, Steve, Buster, and I went on another hike. It was a place about fifteen minutes from where we live called Catamount Reservoir.

We walked through the woods and up the mountain for about an hour until we got to the reservoir. We were having a great time, but the trail went into the water (at one of the more narrow spots at the end) and out the other side. Over the last few weeks Colorado has had a lot of rain, and there was supposed to be a bridge to cross right there, but it was under water. 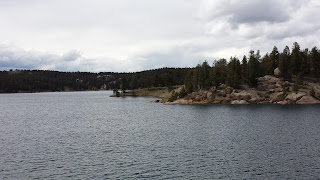 I don't know what has come over me since we've moved to the mountain eight weeks ago. I think some primitive mountain man has surfaced. When we had those April snowstorms, Steve couldn't keep me inside. I was just out in the snow, sometimes not doing more than walking around like an idiot.

So, when we came across a flooded path, what did I say? "Let's just take off our shoes and walk across."
"You're gonna walk across there?"
"Yeah!"
No sooner had I said it then I was pulling off my shoes and socks.

We were both wearing shorts, and the water came up to our knees at the deepest section.  It was fine, for the most part, but those last few second before I got to the other side were killers! It's the mountains of Colorado. That water was cold!
Buster didn't give a fuck. He loved it.

We'll probably head out again some time over the next few days. I'll tell you how it goes.
Man, I can't think of any better place to be retired. I thank God every day that we live in a place like this.