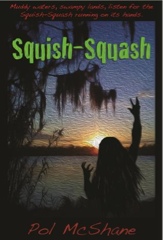 I'm getting excited about the upcoming release of Squish-Squash. It's another one of my favorites that was initially written years ago, and now the world will finally get to experience.
I remember when Steve brought the subject/idea of the creature up.  He was talking about a childhood nightmare he once had that he could never shake.  He couldn't recall exact details, but remembered there was a creature in it that was covered in hair.
With the seed planted, I came up with the backstory and creation of Squish-Squash, and as weird as it is, the wobbly mass of hair has become dear to us.
The book is due out late August!